“Pondering the Pandemic during The Rust Years”-poetry reading

“Pondering the Pandemic during The Rust Years”-poetry reading 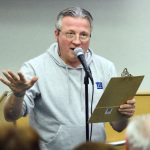 Joe Fusco Jr. is a well-seasoned poet/humorist from Worcester, Massachusetts.

In his new book “Pondering the Pandemic during The Rust Years,” Joe muses about growing old uncomfortably during the pandemic.

Joe’s musings have appeared in Damfino Press, Ballard Street Poetry, Worcester Review, Asinine Poetry, and the naughty ezine Clean Sheets. He was a co-winner of the Jacob Knight Poetry Award in 2002 and was named Best Poet by Worcester Magazine readers in 1999 and 2002.

Joe is still a frequent contributor to Worcester Magazine and the last Worcester Mega-Slam winner in 2017.

Joe has lived in lovely Worcester with his better-half Cyndi and their large family for thirty-five years. He is a registered Independent and sleeps with one eye always open.