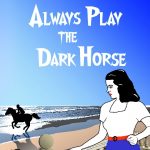 Join us in welcoming back Sharon Healy-Yang, author of a new film noir mystery Always Play the Dark Horse, the third installment of her Jessica Minton Mystery series. Once again diving into the perspective of Jessica Minton, Always Play the Dark Horse shows a gradual but significant transformation in this main character; Healy-Yang describes the newly engaged Jessica Minton as someone who has transformed from the strong woman who felt she had to prove herself to the strong woman who is confident in having proved herself.

Healy-Yang finds mystery narratives as the best format to imagine contemporarily written film noir worlds, as the genre regularly proves itself particularly adept at moving readers into dreamy and shadowy new worlds with sharp twists and turns. Always Play the Dark Horse returns to these aesthetics as Healy-Yang once again brings the magic of film to the page for all mystery-book lovers. 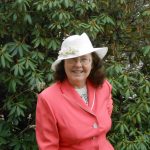 About the author: Sharon Healy-Yang is an aficionado of 1940s cinematic and written mysteries. A professor emerita at Worcester State University in Massachusetts, where she was known for her 1940s hats, she had the great fortune to share her love of literature and film with her students in her courses. Now retired, she’s excited to recapture for readers the smart-talking heroines, suspense, adventure, and sharp wit of 1940s films in her Jessica Minton Mystery series: Bait and Switch, Letter from a Dead Man, and Always Play the Dark Horse.