The Immortality Wars author event with A. Keith Carreiro

The Immortality Wars author event with A. Keith Carreiro 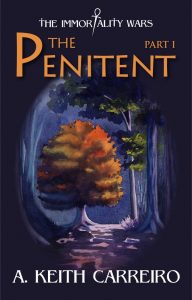 Join us for a book signing and talk with A. Keith Carreiro, author of The Immortality Wars, a series of three trilogies with the first trilogy The Penitent, Parts 1, 2 & 3 now complete. While it can be classified as Christian speculative fiction, it is also considered to be a spiritual odyssey, thriller and adventure. The event is free and signed copies of the books will be available for purchase.

About the books: Despite hints being made throughout the first three novels, readers and the main characters in the story believe they are in a world reminiscent of England during the Middle Ages. However, they are in the middle of a scientific experiment set in the 26th century. For more information visit https://immortalitywars.com/

About the author: A. Keith Carreiro earned his master’s and doctoral degrees from Harvard Graduate School of Education. Earlier in his teaching career he was a professor of educational foundations, teaching graduate students of education at universities in Vermont, Florida, Arizona, and Pennsylvania. He currently teaches as an adjunct professor of English at Bridgewater State University, as well as teaching English, philosophy, humanities and public speaking courses at Bristol Community College. He lives in Swansea, Massachusetts and has six children and 14 grandchildren. He belongs to an eighty–five–pound golden retriever and an impish Calico cat.
In 2014, he began writing the first manuscript of a science fiction/fantasy thriller in a series called The Immortality Wars. It is a cautionary tale about the quest for human immortality. Since the inception of this work, the first two novels of a planned, nine–book series have been published by Copper Beech Press.

It's blueberry time! Picked these fresh treats up yesterday and guess what? Only 2 slices of cake left and 2 squares! Will you be one of the lucky ones? ...