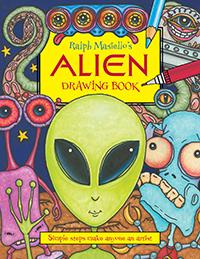 A graduate of Rhode Island School of Design, Ralph has produced numerous works of fine art for galleries in addition to picture book illustrations and magazine covers for Omni and Tennis. He is twice the recipient of the Society of Illustrators Certificate of Merit. But it is his visits with school children that give him the most satisfaction. “Adults are very subdued. They say, ‘Isn’t that lovely?’ But children will go, ‘That’s so cool, dude!’ That’s better than any award.” Along with discussing the technical aspects of book making, Ralph tells his audience about his own education, stressing reading and library skills as they relate to the research and development of an accurately illustrated book. Audience participation and spontaneity is highly emphasized and always leads to boisterous, but stimulating and educational, fun for kids. For years, children have benefited from visits from ‘The Icky Bug Man.’

Ralph is the father of two daughters and lives in Thompson, CT.

Treats, cards and paper roses for your special Valentine! It’s not too late. We are open until 6:30 tonight.Fun-filled February events & sweet treats - mailchi.mp/3ef8f229fabf/fun-filled-february-events-sweet-treats ...