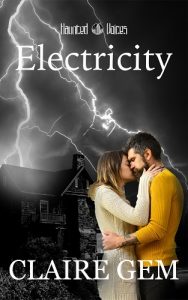 Join us in welcoming award winning local author Claire Gem back for her newest release in the Haunted Voices series, “Electricity”! In ELECTRICITY, the author has created another thrilling, supernatural romantic suspense, this time set in on the grounds of what was once a mental asylum here in Massachusetts.

The event will feature a book discussion, a short reading, and giveaways. Autographed copies will be available for purchase. For more information call 508-949-6232.

This is Gem’s seventh novel. Her debut paranormal romance, Phantom Traces, was released from Soul Mate Publishing in 2015.

In ELECTRICITY, Mercedes Donohue has pulled up roots in Atlanta when her marriage implodes. She’s come back to New England, to the place where she was born. Mercy’s focus is to stabilize her teenage son’s life—he took the breakup pretty hard—and to establish her place, gain the respect of Progressive Electrical’s all-male team.

Daniel Gallagher has been alone since his fiancé’s death. He’ll never feel that way about any woman again, and will certainly won’t try with another independent, strong-willed one. Then Mercy short-circuits his plans. Although the asylum closed its doors over thirty-five years ago, it seems some of the patients never left . . .

Booklovers' Gourmet is with Pamela Redick and 3 others.